We've gotten a few of responses to our recent Flag Quiz, and the winner has been decided.

Our first runner up, Paul Zeis, suggested in his subject line that the U.S. flag should be flying on top. While that would be the case if the flags were flying on the same pole, it does not apply in this case:

From the Texas Flag Code:

The angle of the photograph must have been misleading, because "anonymous" chimed into our comments section with a similar hypothesis, "Is the Texas flag taller than the US flag?"

And now, the envelope please...

Tom Gaden, the winner of our Mystery Flag Quiz, discerned correctly that the Texas Flag in the photo was manufactured incorrectly.

With the red stripe on bottom and the white one on top, the star points to hell.
That ain't no good.

If you point the star heavenwards, you end up with the stripes reversed.
It's a fools errand; that flag cannot be flown correctly! 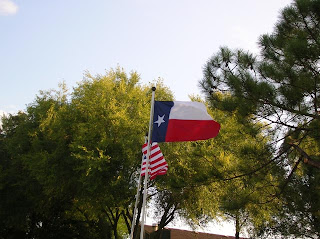 It was taken on Cambridge Street in Houston, mere blocks from the famed "eighth wonder of the world," the Astrodome.


The first person to spot what's wrong with the photo and email the correct answer to texasflagsociety@gmail.com will win.....

The winner will be annonced once they win. (No Cheatin'!) 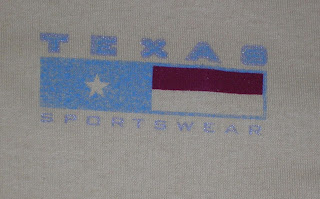 One of our operatives stopped at a truck stop outside of Waco and found these cheesy t-shirts for sale. Not only is the flag upside down, but they took the liberty to change from dark blue to 'powder-puff' blue. Shame, shame!


The Society for the Preservation of the Proper Display of the Flag of Texas (SPPDFT) got started in the early 1980s. Back then, most of the nation was going through tough economic times, but the Texas economy was doing pretty good due to the oil boom. As a result, a lot of folks were leaving their homes in the East and Midwest and heading for Texas. Sort of a second ‘G.T.T.’

With this influx of folks from other states, an unusual phenomenon started to occur. We started seeing the Texas flag being displayed upside down. At first we thought this was due to so many people moving in from other states, but, under closer examination, we realized that lifelong Texans were equally at fault. Some of the more blatant and embarrassing examples from this period were:
-- The Texas Flag in front of Foley’s Department Store in Houston for the Foley’s Thanksgiving Day Parade (this one was on TV).
-- The Texas Flag in front of the District Office of The Department of Public Safety in Temple Texas. When called to his attention, the trooper in charge actually apologized.

The more we looked for misuses of the flag, the more we saw. It became obvious that there was a pressing need to organize and start informing people to fly the flag properly.

Texas is a proud state and we Texans are very proud of our flag. There are only five states that have a flag that does not differentiate between top and bottom (Alabama, Colorado, New Mexico, Ohio, and Tennessee) and Texas is not one of them. You never see the California Bear or the Louisiana Pelican flying upside down, but, for some reason, people tend to turn the Lone Star upside down.

To right this wrong, our representatives are out driving the highways and byways of our grand state, looking for culprits who, through negligence or stupidity, choose to fly our flag upside down.

In the suburban wastelands of North Austin, people love to display their Texas pride.
These Round Rock homeowners were shamed, however, when an SPPDFT operative caught them with an upside down Texas flag on 7/17/2006.

A photo was taken, and a citation was left on their porch. 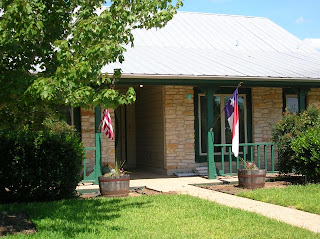 Our reeducation efforts were not in vain. Later in the year, the very same house was seen with a Christmas light display featuring a huge outline of the Lone Star State.
Posted by S.P.P.D.F.T. at 11:50 AM No comments:

In order to clear up some confusion, the SPPDFT offers this short lesson:

1. Texans eat chili and have a flag:

2. Chile is a South American country.
They also have a flag:

Although the two banners have the same color scheme and both stars point to heaven, I've never seen a Chilean flag flying upside-down.

It's probably because they have better public education in Chile.

The City of Love

This store in Paris, Texas sells rustic ranch-style furniture.
They were caught in the act of mis-flying the Texas flag on 6/10/2006.


Since the French tricolor can't really be flown upside down, I guess these Parisians don't pay attention to that sort of thing.

A "Texas Friendly" note was slipped under their door asking them to display their Texas flag properly in the future.
Posted by S.P.P.D.F.T. at 9:44 AM No comments:

Is Upside-Down the New Rightside-Up? 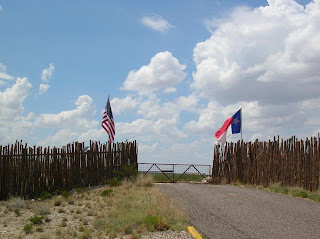 Most folks know that six flags have flown over Texas.
That's just the tip of the iceberg, pardner. 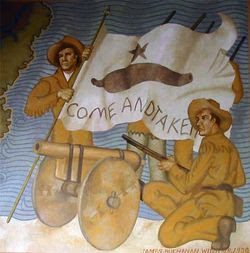 I guess it used to be easier to figure out which way to fly the flag when it had words printed on it.
Posted by S.P.P.D.F.T. at 3:09 PM No comments:

Greetings, weary internet traveler. You have located the official blog of the SPPDFT, an organization dedicated to spreading awareness of proper Texas flag etiquette.

Toward this aim, our diligent operatives ceaselessly search for improperly displayed flags. The evidence is recorded photographically, and where it is possible, a citation is issued. 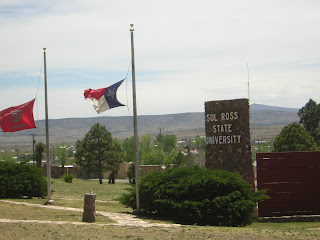 That week, I called them on improper display twice. The University DPS has not, as far as I know, made the same mistake since I lodged my complaints.

Some will say, "The red goes on bottom and the white goes on top."

Here at the SPPDFT, we say, "The star always points to heaven."

Check back here for more shocking violations of the Texas Flag Code; only at the SPPDFT.

Also, if you have any photos or anecdotes to contribute to the cause, we can be contacted at: texasflagsociety@gmail.com
Posted by S.P.P.D.F.T. at 1:28 PM 1 comment: