Sir! The Compass is Broken!

This is a two-parter, strung together with a weak theme.

The first part occurs in Round Rock, where a branch of Compass Bank was caught flying one of those darn improperly manufactured flags. The star is sewed on upside down. Does that make you trust this compass?

Now, I'm not sure who it is making these things, but they'd better cut it out. Next thing you know, we'll be getting flags with upside down stars that are also poisoned with lead. 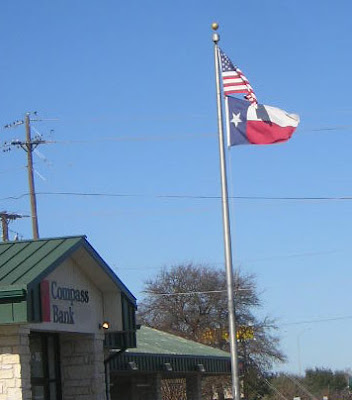 Part the Second finds a group of Boy Scouts lost in the deserts of West Texas in the Summer of 2000, presumably because of a broken compass and a general inability to tell up from down. 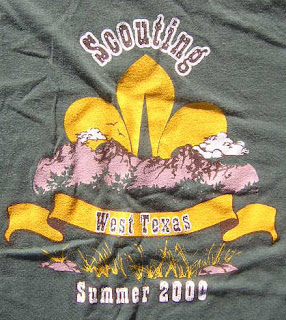 There's the back of the shirt, which I found at a thrift store. I'm sure the lads had a lovely time. West Texas is a great place for Scouting.

From the front of the shirt (Made In Canada), we get more details. This expedition was international! Along with the delegates from Great Britain and a party representing the First Peoples of America, we have a group of Scouts with an upside-down Texas flag as a banner. What does that say? 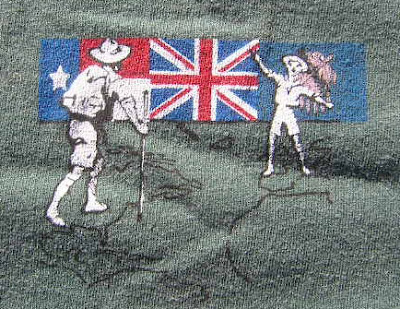 I can imagine the British kids mocking the Texans around the campfire, "Your flag is upside down, bloke."

A Texan then points out that the Union Jack is also upside down, a supposition which the other children can neither prove nor disprove.
Posted by S.P.P.D.F.T. at 3:25 PM

Maybe Compass got their Texas flag from the same folks who make U.S. flags for Hillary.