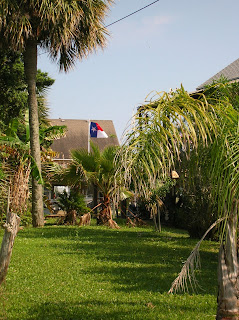 One cannot think of Texas History without thinking about Galveston. This grand city was once one of the largest and most important ports on the Gulf of Mexico. Galveston has a colorful history of pirates, hurricanes, immigrants, gangsters and Mardi Gras. Galvestonians are proud of their state flag and, as you drive the streets of the historic district looking at the beautiful old victorian homes, it is hard to find one without the Lone Star flying from the front porch.
Today there is an invasion going on in Galveston. An invasion of Houstonians trying to escape the hustle and bustle of living in the 4th largest city in the country. These part-time Galvestonians have filled the western end of the island with weekend retreats. Unfortunately, they have brought some of their big city habits with them -- such as not knowing which end is up on the Texas Flag. This flag was tucked away on a canal, but it did not escape the eagle eye of SPPDFT. Once again, caught in the act!
Posted by S.P.P.D.F.T. at 7:04 PM