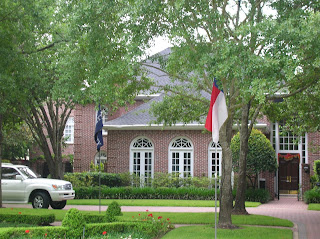 The community of West University Place lies in serene, suburban southwest Houston. West University is known for it's tree-lined streets and beautiful homes. Appropriately named, the community lies just west of Rice University. It is home to physicians, college professors, oil barons, and a few Houston Astros.
The grand boulevard of West University Place is University Boulevard. Along this oak-lined street, families proudly fly their flags; many on flag poles in their front yard. Well, it appears that one West University Place family needs to study up on their civic lessons because they can't seem to get their Texas Flag flying the right way (see photo). Our southeast Texas agent found this violator on April 28, 2007. We hope they took the citation that we left in the good spirit in which it was intended!
Posted by S.P.P.D.F.T. at 6:44 PM